I have now spent my first week at the NGO. I ended up with an internship, full time, from 9 to 5 :-). It is interesting to see their activities and struggles from the inside. I helped out with the translating of a press release concering the 2nd draft of the law 103-13. This draft is about the violence against women and is, according to the NGO, even worst than the first one….

On my second day I assisted at the pressconference (wish was hold in arabic,  I was in charge of taking photos) where the coalition “Le Printemps de la Dignité” (the springtime of dignity) was reaching out and calling upon a change of the mentioned draft. Several women were present and sharing their stories and how they feel that they have been let down by the current legislation.

I am know in the Moroccan “rythme” and I am adapting to the environement. Always having coins in my pocket,for bus, tram, paying the parking or buying lunch-bread at the local small shop. Not worring that you have no idea what bus will come your way, nor when it will show up. And when it eventually does, not so sure you will be able to get on :-).  What is more of a challenge though is the internet access at the NGO…the wifi has its own agenda… 🙂 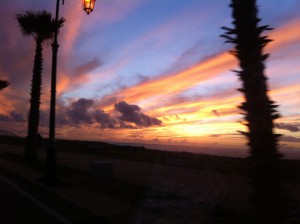