It’s been a while since we last wrote.

Two weeks ago we came to Jinja after travelling in a bus for 17 hours… Matilda did not pee for 17 hours! Quite amazing. Of course there are no toilets on the bus. If you’re going to pee you have to do it roadside outside the bus while everybody is staring at your bum.

Jinja is the second biggest city in Uganda and is located just by the Nile. We have been hanging out with Madeleine and Linnea, having a really good time. We’ve also been out dancing, which we’ve missed while in Kisoro, was loads of fun. We’re enjoying the music here! After a night out dancing we came back home to our hostel, realising there was a hole in the ceiling. We started laughing as we thought the ceiling had just broken. After cleaning up we’re realising there are things missing. A music-player, some money and an Iphone. Not as much fun. But at least we still have our computers, so in a way we were lucky. The manager of the hostel called the police. Two policemen came to have a look, only to come back an hour later, at 6.30 am. Knocking the door to wake us up, wanting to check the hole in the ceiling once more. After simply chucking around various stupid explanations to what might have happened, one policemen turned to Matilda and asked if she was the leader of the group, we started laughing uncontrollably, in his face, oops, and Linda started to sing “follow the leader, leader, leader, follow the leader”. Then the police asked us what we thought they should do about the situation, Matilda answered: “I don’t know, I’m a student, you are the police. You figure it out”.
Still not loving police…

Also, we’ve been horse riding by the Nile, which was really amazing. We were cantering a lot. We are still sore in our muscles after five days. But it was worth it. After that we spent Christmas at Sipi falls. We went for a walk to see the three beautiful waterfalls, swimming in the Sipi river (really cold, but nice) and having Christmas dinner on a fancy restaurant – the best food and wine we’ve had here. 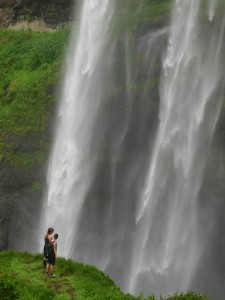 Of course we are studying some too, almost done!

We do not miss home very much, though we miss vegan cream and tofu a lot…