The last several days in Tanzania has been educational in many different ways. Firstly, we have learned to appreciate the Swedish schools and their equipment. For example, there is only one computer at the entire school (Msiriwa Secondary School) that only the principal and assistant principal use. The teachers also do not have their own work spaces, there is a small room that everyone shares with a standard that we are not used to. There is also no copier so if the teachers want to copy something they have to go to town which is about 30 minutes away by car. The teachers have only a few textbooks, blackboard and chalks to use as teaching materials. Despite this, they still seem to get into teaching that makes the students manage their finals. Impressive, to say the least! 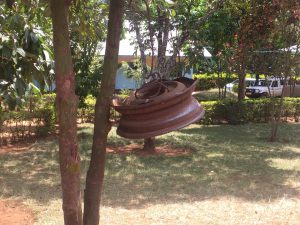 A rim used as a bell

Secondly, we have learned to endure a heat that cannot be described in words! We were going on an excursion to Lake Chala where we had thought it would be nice to walk a bit in the forest and then cool off in the water. That was not the case! We had to go for an hour to the lookout spot in the pressurized heat of the savannah environment, so no shade! And after a while at the lookout point, we turned and went the same way back. Dizziness was severe, breathing difficult due to height and sweat flowing. But we survived! Then we came to the slope, where you come down to the water. Emelie did not have any difficulty getting down other than she slipped on the gravel a few times. Josefin, on the other hand, has never challenged her fright of heights in that way before! The sweat ran worse than ever and she got some help the last bit down. But we survived this too! 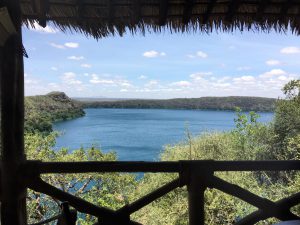 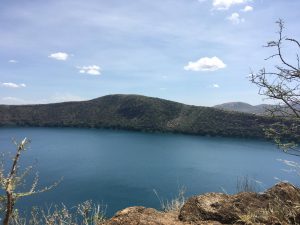 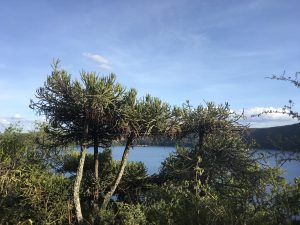 Last but not least, we met our remote relatives at the pool. It was a wonderful meeting and we recognized ourselves in the individuals… 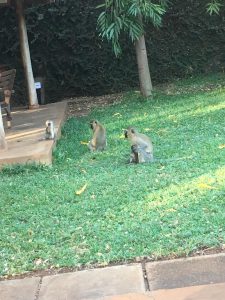