With mixed feelings it is time for me to leave Mumbai. I have been here for almost a year including my 5 months internship with Vacha, travel and now the 10 weeks of MFS. So I have quite made myself a second home here.

As a last event with Men Against Violenca and Abuse (MAVA) I was invited to come to their arranged film fest in Goa called Sambhav, meaning possibility in Hindi. The fest is a two-day film festival on gender, masculinity, sexuality and relationships in 8 cities and 4 districts.

Attending the first day of the festival was the Swedish ambassador in Mumbai, Ulrika Sundberg. I had the pleasure of talking and discussing with her on some of the topics above. 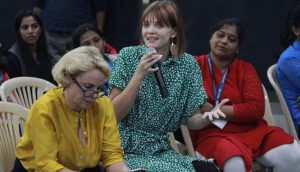 A few documentaries and short film that was screened included:

And of course the documentary that has been made on MAVAs work.

If you live in Sweden the documentary is available to stream here:
https://kunskapskanalen.se/program/15348/killarna-som-vill-forandra-indien

Now it is time for me to finish up packing and later tonight catch the flight back home to Malmö!

India, don’t you worry (well I know you have more important things to worry about but..)!
I will be back sooner than you know!