Quotes from the interviews

Student: ” I feel confident to run for president. I know I am able to. And could be Tanzania’s first female president. However, the Tanzanian society does not allow girls to perform tasks that are seen as ‘a man’s job’. Like being a president. Some people think the country is too big for a woman to be running it. [SMILES] BUT I know that girl’s, can do any job a man can. Even better.”

Staff X: ” I do not think international actors are imposing on us when we are given sponsorship… If they give us conditions  ‘A, B & C’ in order to get funding for our project, and the conditions are not harmful to us, the organisation or its goals, I do not see a problem. The opposite. It is extremely good! Sometimes it is healthy to listen to the advice of an outsider. Maybe they have something to contribute and see things differently than us.”

Staff Y: “Concepts such as gender equity or gender mainstreaming are not so common to hear in Tanzanian secondary education. Luckily some of our students have had that exporsure throught their parents. Others have not. Most of us Tanzanians come to really understand these terms when we study at university level. That is a shame. If I could ask the current president to change one thing, in order for there to be more equality in Tanzania it would be just this. He should make gender studies mandatory from primary education. That way, kids will learn at a young age that there should be equal distribution of chances, opportunities and resources for both sexes. And only then can we teach our children that gender stereotypes is just something society has made up. But also, we must not forget about men from poorer backgrounds. Somehow we have to make sure women get their voices heard but that these men are also taken into account and are not left behind. I think that is what GENDER equality is about.”

All of the above are #Melscopyrights hehe. Through interviews, one focus group session and participant observation, I, in a structured and formal setting, or just over some tea; asked students and staff members what they thought of the school. The organisation that established the school (my focus) JOHA Trust, and the involvement of foreign actors in this particular educational organisation. Most of them were very happy and liked the school. They had suggestions on things that could be done in order to continue JOHA Trust’s objectives of supporting girl’s education. Some that worked at the school felt like the school was “losing its touch”; as the percentage of students that are funded by JOHA Trust scholarships to study at the school has decreased, for multiple reasons.

The quotes are little extracts from 20-40mins long individual interviews. As I mentioned above, I had ONE focus group session which is a type of group interview where a facilitator (me) introduces a topic and allows the participants to freely discuss it.  I chose girls that are all on scholarship as it relates to the JOHA Trust and their objectives. At first, the 5 girls that were selected for the discussion, were a bit shy in answering the questions I had for them related to the topic of gender (in) equalities in Tanzania and their own personal experiences if they had any. But, after about 5mins they loosened up and we had a nice 30mins discussion. At times they were so eager to answer they almost interrupted each other… It was my first time conducting such a session but I think it went quite well and the students were glad to share their stories.

Participant observation is a type of research technique in which one becomes part of the daily lives of the subjects of the study. In my case, this was the whole point of staying at the school for one entire week. I became a part of their daily life. This is how the girl that asked me to come speak to her class could access me. I was there, present, either by sitting with random students and talking about ordinary stuff. Or by making the conscious decision of attending their lessons and see how a normal school week looks like, to the students of the Barbro school.

Today I am pulling an all-nighter because I have a assignment to hand in a few days from now. And of course, I want to make sure I finish it of on time. Just one last thing, on Friday I am finally (!!!) meeting up with the programme officer at the TGNP- Tanzania Gender Networking Programme (my 2nd organisation of focus). I am going to get some juicy information about the organisation haha. And I have been told there is a library at their offices with similar studies as mine. I am so excited to get some Tanzanian literature in my paper too 😀 So yeah that’s about it. I’ll update on Sunday probably or Monday on how this week went. 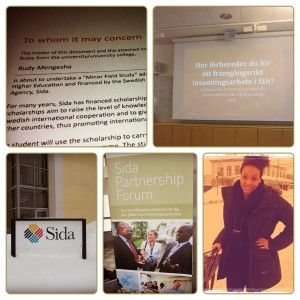 In the beginning of last week I attended Sida’s MFS-course in Härnösand. On Sunday I travelled by train from Malmö 7 o’clock in the morning. I hardly got any sleep but managed to get myself up in the morning anyway. Somehow when I know that I have something important to do in the morning it wont matter how much sleep I get, I still manage to get up. So the trip took me about 10 hours with a stop in Stockholm. On the way to Härnösand I just noticed how the amount of snow kept on increasing as we got further north and closer to Härnösand, which was really nice to see (never been this far up north!!). When the train finally arrived in Härnösand, around 5 o’clock in the afternoon I got off the train and took a look around.. confused as I was, I was still happy thinking YESS!! there were other students looking as confused as myself. So I asked one of them if they were on their way to the MFS-course and they said yes. The group grew and we were about 20-25 students walking together through the snowy town of Härnösand, trying to find the place that we were supposed to be at. It wasn’t that far away from the train station. So we walked  and walked with our bags and everything…when we finally got to the place, we first arrived to the main building where we got our passage cards/keys to our rooms, main building and the “guest house” where we stayed. I really liked the rooms, nice and clean! 🙂

Sunday evening started with a short introduction, mingling and dinner…

The following days were really educative and I learnt so much, especially about Swedish development aid and the history behind it. We also got to see a little bit of Härnösand on our way to restaurant “vägg i vägg” where dinner was served every evening. Härnösand is a very nice town.

I think not only MFS grantees needs this course but everyone that is interested in carrying out field work of some sort, or is going to do such. I don’t want to reveal details about the course because there might be others who are attending soon. But let’s just say that the lecturers were so passionate about what they were doing which was so inspiring for me who is now planning my project.

I got so many new ideas for my thesis and developed new ways of viewing certain issues.

Overall this course was so worth it, I would attend again and again if it was possible. I’m happy that I got the opportunity to see the northern parts of Sweden and meet other intelligent and driven students who are just as passionate about what their doing as I am, but also the passionate lecturers. Priceless experience! Now, I feel more prepared than ever and I can’t wait for this field study to start!