One of the first things I knew I had to be cautious about before coming to do a field study in Zanzibar is the privilege I hold as a westerner. Not only was I highly aware of this because of previous travels in East Africa, but also because of knowledge and information that was shared at the preparatory course for the scholarship-recipients in January. The MFS-scholarship I have been given to be able to conduct this study is way more than the yearly income for the average Zanzibari and the majority here live under the poverty line. That alone puts a lot into perspective. What I did not realise, however was that my Eritrean identity would also allow me to have other types of privileges in Zanzibar. These privileges would also be highly related to my research topic of colorism.

For those of you who are unfamiliar with the term, colorism is a form of internalised racism where the idea is that lighter skin and eurocentric features are better and more desirable. Colorism can manifest itself in many ways, everything from bleaching one’s skin to appear lighter to wishing to marry a person of a lighter skin complexion in order to have lighter-skinned children. Although the phenomenon is highly common all around the world, the discriminatory practice is often not talked about when discussing racism or discrimination on big platforms. 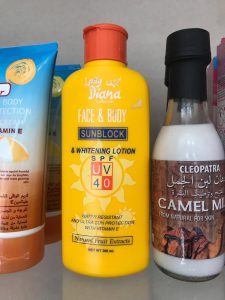 During my stay here, I have come to realize that being of Eritrean origin has led to me experiencing some privileges, that in my opinion, I would not have experienced if I was of a darker skin complexion or if I had a different hair texture. As a Black woman of Eritrean heritage, I get daily comments from people here about how I must be Ethiopian because of my “beautiful skin and long hair”. My hair is drawing a lot of attention due to its’ thickness and length and there is not one day where I do not hear comments about my hair. Even though it is always nice to receive compliments, it is hard to appreciate them knowing that they are mostly rooted in colorism and the appreciation for phenotypical features that are viewed as “non-African”.

It is common that tourists and non-Tanzanians in Zanzibar get asked questions about where they are from and in general, there is a curiosity to get to know visitors on the island. The usual assumptions I get about where I am from are Ethiopia, Somalia, “Abyssinia” and when I have worn my hair straight or curly, people assume that I am Arab, Indian or Brazilian. In the outskirts of Stone Town, I was getting comments about me being “cappuccino” (a term used for people who are mixed) and that there could be no way that I was fully African. Which saddens me because of the fact that prior to coming to TZ, I thought I would blend in more with the people here and instead, I have never felt more like an outcast.

At the same time, it has also become evident to me that White privilege is real and cannot be overlooked. During several occasions, I have experienced a better customer service, welcoming and better attitude in general when being around White westerners than when being in a group of Africans or westerners with African heritage like myself. The internalised racism sits deep and to combat it will take several measures. Hopefully, my study can contribute a little bit to highlighting the important issue of colorism and internalised racism that occurs globally.

Below you will find a great article about White privilege, written by a fellow Swedish student who is doing an internship in Tanzania. This article also inspired me to write this blog post.