The Swedish Society for the Study of English (SWESSE) – the umbrella organization for English Studies in Sweden – has just announced the winners of its recently created ‘BA thesis of the Year’ awards. Both of them (linguistics and literature, 2014) go to Malmö.

Watch this space for interviews, pictures and more information.

Education in Languages of Lesser Power 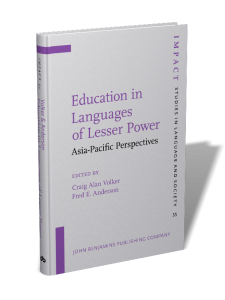 The cultural diversity of the Asia-Pacific region is reflected in a multitude of linguistic ecologies of languages of lesser power, i.e., of indigenous and immigrant languages whose speakers lack collective linguistic power, especially in education. This volume looks at a representative sampling of such communities. Some receive strong government support, while others receive none. For some indigenous languages, the same government schools that once tried to stamp out indigenous languages are now the vehicles of language revival. As the various chapters in this book show, some parents strongly support the use of languages other than the national language in education, while others are actively against it, and perhaps a majority have ambivalent feelings. The overall meta-theme that emerges from the collection is the need to view the teaching and learning of these languages in relation to the different needs of the speakers within a sociolinguistics of mobility.