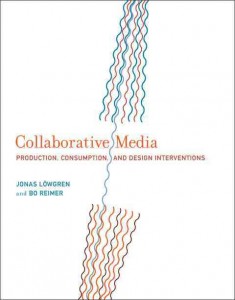 With many new forms of digital media — including such popular social media as Facebook, Twitter, and Flickr — the people formerly known as the audience no longer only consume but also produce and even design media. Jonas Löwgren (Professor of Interaction Design) and Bo Reimer (Professor of Media and Communications Studies) term this phenomenon collaborative media, and in their book they investigate the qualities and characteristics of these forms of media in terms of what they enable people to do. They do so through an interdisciplinary research approach that combines the social sciences and humanities traditions of empirical and theoretical work with practice-based, design-oriented interventions.

Löwgren and Reimer offer analysis and a series of illuminating case studies — examples of projects in collaborative media that range from small multidisciplinary research experiments to commercial projects used by millions of people. Löwgren and Reimer discuss the case studies at three levels of analysis: society and the role of collaborative media in societal change; institutions and the relationship of collaborative media with established media structures; and tribes, the nurturing of small communities within a large technical infrastructure. They conclude by advocating an interventionist turn within social analysis and media design.

Presentation
The seminar started with the sharing of a short film showing footage from several examples discussed in their book:

Bo began by discussing a shift from a stance of analytical/critical within the discipline of media and communications studies to one of interventionist, hands on and practice-based approaches that engage with media “in the wild.” Similarly, Jonas described the shift of viewing the computer as a tool first to seeing it primarily as a communications medium. Citing the K3 project Avatopia (2001-03), a collaboration with Swedish national television (SVT), they discussed how we now work in an age when society is increasingly producing its own media. The Kliv project was discussed as a participatory design process using video cameras that helped medical staff in intensive care units to self-manage the knowledge processes of their working environment. The emphasis here was on designing beyond the object, “infrastructuring” the participatory media event in such a way that the process could live on as an organic part of the working environment. In all of the examples given, the collaborative element of the media (rather than a “new” or “digital” quality) is the key factor. Collaborative media  described as an increasingly cross-medial and material practice. Production and consumption practices becoming more accessible, to the point where designing the media infrastructure itself is a realistic possibility for regular users. In conclusion, Bo and Jonas cited their five general aims or hoped for outcomes for collaborative media researchers:

Summary of Q&A in relation to materiality

Q: What do you mean by “media materials”?

A: You can hold the media, lift it up, put it in your pocket. Media materials such as Arduino, the internet of things, the material infrastructures. Stuart Hall’s classic model of encoding/decoding takes infrastructures for granted. Collaborative media emphasizes that the infrastructuring and content creation aspects are getting closer.

Q: At a recent media and communications conference someone discussed the idea that we might think of the post office as a medium. Discussions on the materiality of media are very dependent and determined by how media are defined.

Q: The question of the material would be in what specific ways are these specific social material practices? In the example of the post office, one might ask what are the social material practices around the stamp work, etc. We cannot understand what is going on without looking at these specific practices. If this model works, it guides us in some way to look at infrastructuring practices, what does design do, what does consumption do, when we look at a certain conglomerate of practices?

A: These are projects from various times in the last few years, so for each one would need to go back and look at how they were defined or represented at the time. Varying levels of skill in a collaborative project in regards to using media as tools for representation can play a part in generating dialogue around the possibilities of representation.