Linda Hilfling presentation
Linda Hilfling, the new K3 PhD candidate in Interaction Design, has for several years been a practicing artist and discussed several of her past projects. This included Misspelling Generator, a browser extension that works with the spellchecking functionality in Google Search to suggest alternative spellings of words that might help users to get to otherwise censored search results. For example, in the case of someone searching for “Tiananmen Square” within China, the iconic and most searched for images of the protests on the square would be withheld from any user carrying out this search within China. With the browser extension installed, however, the user will be prompted with misspellings of Tiananmen Square – replacing Google’s default “Did you mean” prompt with a “Have you tried” message that offers several misspellings that will get around the censored search results that a correctly spelled search request would yield. One might call this a kind of “accidental activism.” 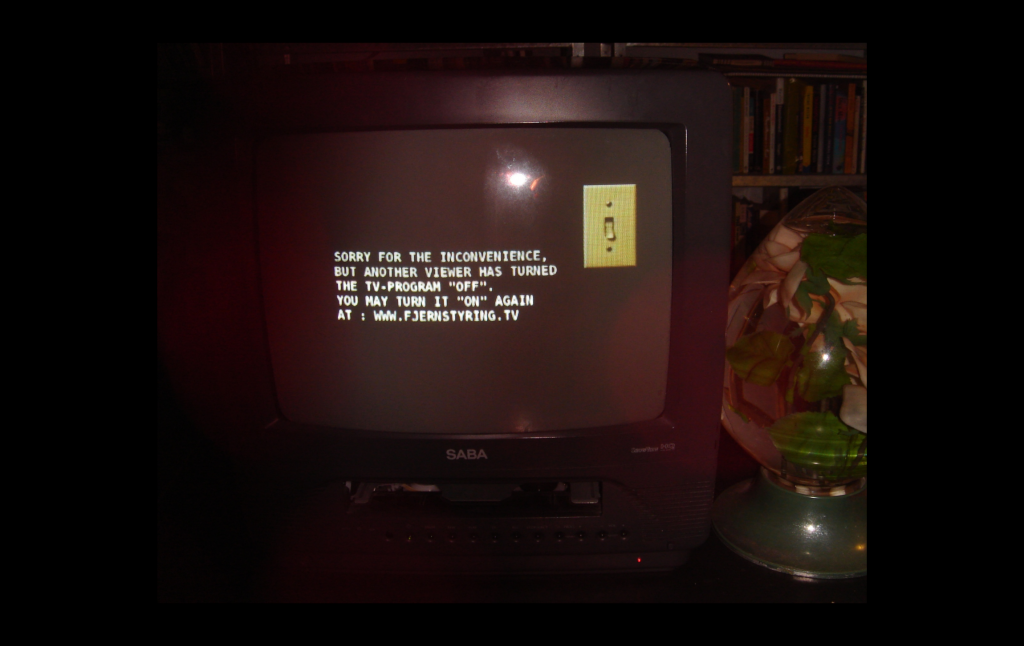 The next example shown was fjernstyring (“remote control”), a project involving transmission hacking and user-generated submissions that was carried out in collaboration with TVTV in Copenhagen. The project instigates questions around media control mechanisms, egalitarian models of distribution, what constitutes as participation and the possibilities for a kind of “radical democracy,” such as Laclau and Mouffe have outlined. In a similar vein, Gate Peepin’ and A Public Domain act as further interventions and reflections on the notion of language as a commons, one which is potentially being amputated and fragmented by things such as terms of service, trademarks and licenses registered in databases of National Intellectual Property Offices. 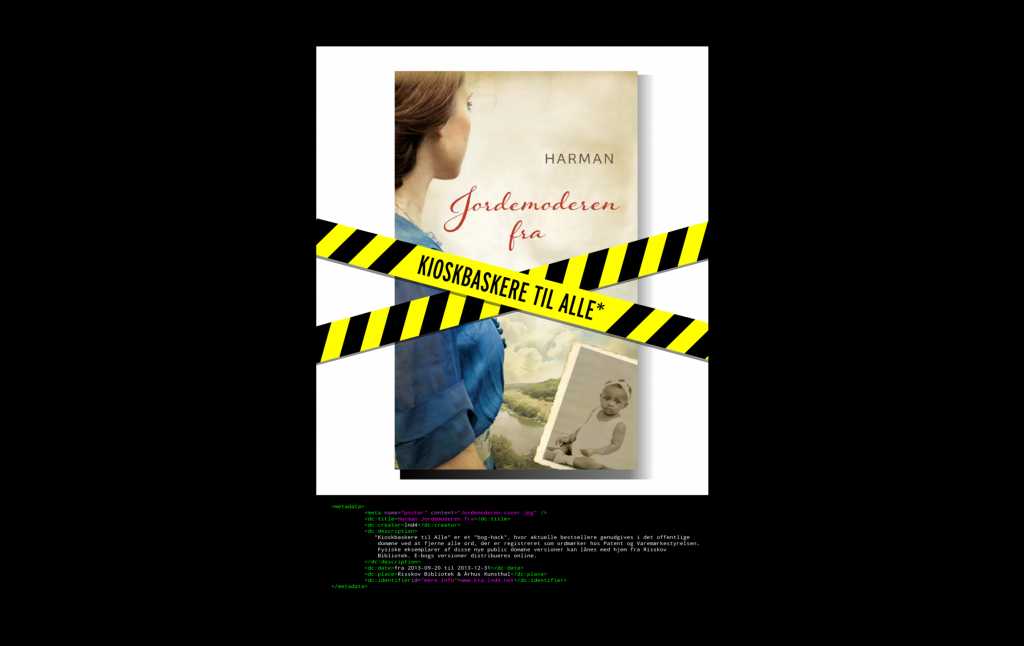 Linda concluded by sharing her most recent project, Kioskbaskere til Alle (which is currently being exhibited at Kunsthal Aarhus). This book hack republishes current best sellers into the public domain by removing all wordmarks (words which have been registered as trademarks in the registers of the Danish intellectual property office). Although the books can be understood as amputated and fragmented by the process -it is left to the readers to imagine the content and to fill in the blanks, nevertheless it is due to this truncation that it is literally a public domain.

Jacek Smolicki presentation
Jacek Smolicki, the new PhD candidate in Media and Communications Studies (and working with the Living Archives research project framework), studied at Konstfack and specialises in sound focused art and research. He began his talks with two quotes he sees as encapsulating his understanding and approach to sound:

“to listen critically is to recover the past…” (Theodor Adorno)

“every major social rupture has been preceded by an essential mutation in the codes of music… The noises of society are in advance of its images and material conflicts. Our music foretells our future. Let us lend it an ear.” (Jacques Attali)

Jacek introduced his Last Walk of Olof Palme project in relation to his general interest in exploring ways of communicating history. Using historical materials relating to the murder of Swedish prime minister Olof Palme, the work aims to recreate and reenact the walk that Palme made in Stockholm from the cinema to the subway station, primarily by tracing out and transposing the GPS coordinates of the walk. Jacek spoke of Hannah Arendt’s notion of the “space of appearance” and how the experience of being at the space was critical in recreating the experience.

The next work discussed, Dzielnica 1941-1943, was also a sound walk, one that looks into the history of this Jewish neighbourhood in Krakow. The neighbourhood featured prominently in the Spielberg film Schindler’s List, and part of the challenge of this project was to recapture the “pavement” level of collective memory which this well-known Hollywood telling could be said to have glided over. A primary feature of the work was the way in which it remediated the disappearance of the area in sonic form. 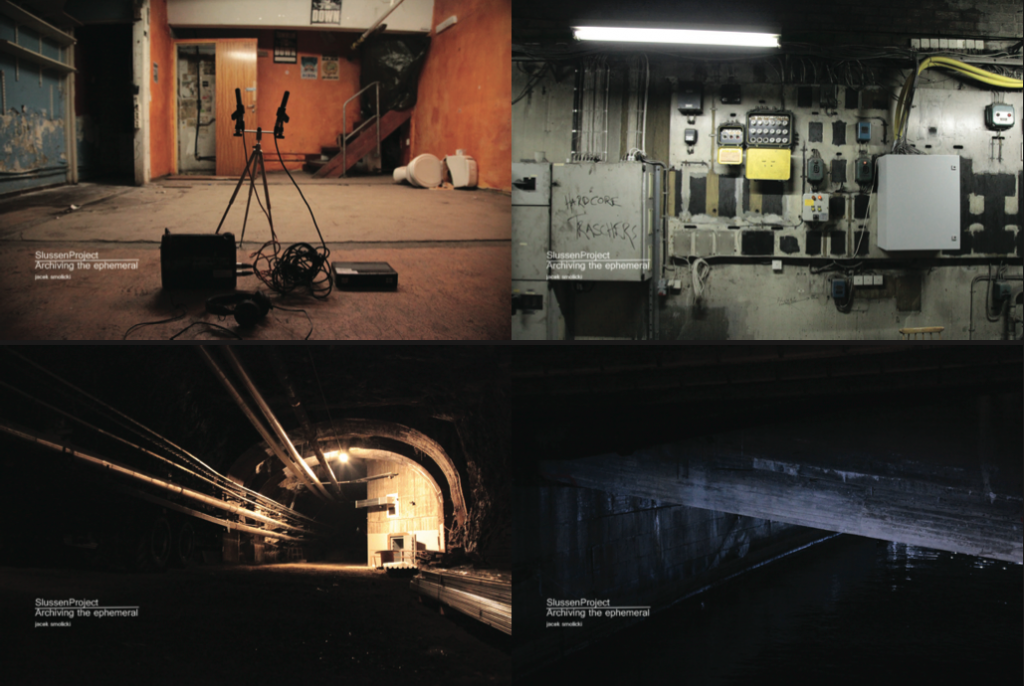 The final work discussed was Slussen Project – Archiving the Ephermal, a current and ongoing project that is making sound recordings that aim to archive this area in Stockholm that is currently undergoing a major redevelopment. The recordings aim to capture the liminal voices and sounds of this space that are currently not under consideration, and to help them reverberate by mapping onto both the existing space and also in tandem with archival materials tagged within an online database.

Summary of Q&A
Q for Linda: In the piece Kioskbaskere til Alle you are working with digital methods to hack a so-called analogue object of the book. In work like this do you find any meaning in a distinction between “material” and “immaterial”?

Linda: No, have never really felt such a distinction to be of meaning in working with code and art. Focus in a work like Kioskbaskere til Alle is on control and highlighting structures of control so that one can potentially more readily intervene. This might be seen as a materialising of these structures, but not using any kind of distinction between the tools involved as more or less material.

Q for Linda: Could your interventions be understood as gathering a counter-public?

Linda: The fjernstyring project was on national TV and being used by the public. As an artist and designer have not been focused in showing work in galleries but rather in creating interventions that users’ can encounter in their own spaces.

Q for Jacek: The Adorno quote seems particularly focused on looking towards the past, how can one look towards the future in the kind of practice you are engaged with?

Jacek: Currently discussing a work relating to the Fukushima disaster and discussions with collaborators so far have included the question of how we could create a future speculative scenario based on current data on things like contamination and radiation of the space, as well as considering political and societal futures. Also working with Mahmoud Keshavarz on the notion of “materializing futures” and proactive forms of future archiving.

Q for Jacek: You spoke of Art Spiegelman’s Maus series of graphic novels as a more humble yet powerful visual representation of a historical incident. Do you see any major differences between visual and sonic forms of representation?

Jacek: In something like the Last Walk of Olof Palme project there was no determined set of facts for this, and the use of a medium such as sound could be understood as being more immaterial that others in that it allows the user to interpret on their own, making one potentially more reflective and thus shaken by the experience.

Q for Jacek: Is sound really more immaterial? For some sound artists sound is not immaterial at all.

Jacek: Because sound is so dependent on time it is more shapeable. Adorno’s distinction on listening vs. hearing – the way in which hearing extends on the time access. Sound could be seen as having a more flexible margin for experimenting in regards to representation.