How material objects have become better than people at displaying truths. Foucault’s series of lectures as a good starting point on this: how materiality enters into the category of political thought and ontology at the same time that nations discover they are people, English state composed of two people: the ruler and the people, from here discourse of race arises, transforms political discourse from universality to a materiality of the local from now on. 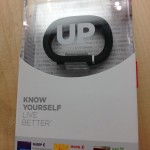 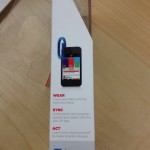 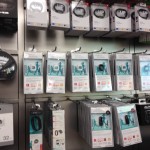 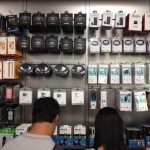 Inspired by how one teaches observational drawing, interest in what happens when one goes from 2-dimensional to 3-dimensional representation. The Kozbelt article looks at visual cognition, trying to address questions of whether artists “see better,” have better motor skills, etc.? In one particular case, the “novices” actually outperformed the artists/experts, one in which they were asked to draw an actual pair of scissors. Now working with eye-tracking and considering the effects and differences of the salient properties of an object vs. upper level mental processes of idea of the object. 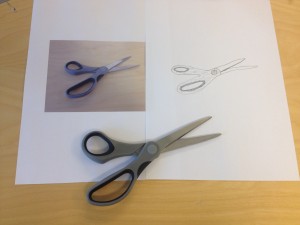 Working with Bruno Latour and his argument that the problem of the public is not of representation but of relevance. Questions around what characterises or constitutes a public? The way in which institutions are not able to deal with certain problems that are “outside” of their capabilities to address them. How one can articulate issues through different material practices. Making and materialising everyday entanglements.

Interested in relationship of materiality to co-design and question of how one brings a making/design practice into a knowledge practice. Not only working in text but also using tangible materials, rehearsing new ways of doing practices. The need for some form of overview to make sense of complexities. 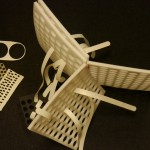 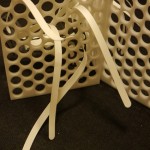 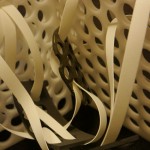 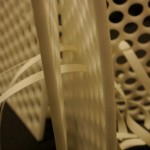 The article looks at what is “new” about feminist materialism, what kind of “turn” it is. Relationship to linguistic turn and representationalism. The very diverse backgrounds of those working with new materialism, writers from quantum physics, biology, cultural studies, etc. Debates in this field over whether this is something “new” to such materialisms (Sara Ahmed has raised this question in several articles). New feminist materialism has helped to articulate the more performative elements of academic practice. Non-representational, practice-led work where theory and practice are not so easily disentangled.

The article is interesting in many ways. Both the style and the way she constructs discourses around table; a thing with a long history in writing practices (table has come up as an example for many thinkers) the discussion of a table (Marx’s view on commodity fetishism), the table (Husserl’s view on table as a thing that world begins to unfold from there) and this table (Heidegger and later the way she discuss feminist tables and later black feminist tables).
Tables give her possibility to start from historical materialism to how materialism of bodies take shape by occupying space in some certain ways and not others. And how materialization of bodies shapes the space and how space shapes bodies that are doing things on table, around tables, behind tables:
“Those who are “out of place” have to secure a place that is not already given. Such work makes “the table” reappear as an object. The table becomes a disorientation device, making things lose their place, which means the loss of coherence of a certain world. Political work hence reshapes the very surfaces of bodies and worlds. Or we could say that bodies resurface when they turn the tables on the world that keeps things in place.”

Attended a PhD workshop in Aarhus which attempted to address the theme of this year’s Transmediale festival on the “post-digital” and “afterglow.” The interesting aesthetic qualities of the Murata video in relation to a notion of materiality. The way in which the highly “immaterial” glossy 3D renderings take on certain “material” dimensions in the sense that they seem aged or nearing an obsolescence of their own. The video seems uninterested in clear cut distinctions between “virtual” and “real,” material and immaterial. How a notion of materiality is being reshaped or remoulded in the face of the continuous expansion of the digital. Interest in obsolescence in relation to “new” media. Also, Graham Harman’s lecture at Aarhus in which he challenged new materialist concepts, such as those of Jane Bennett (whom he is very complimentary towards).

Material medium of smell. The sensory studies/anthropology turn and its challenge to the material turn. Sensory studies critical of several fields, including phenomenology and semiotics. Sensory studies approach has many consequences for interaction design, which is still highly informed by phenomenology writing. Odours are amorphous – cannot be contained, inherently cross boundaries. Odours communicate, but not through language. The practices of fragrance communities, with their focus on anecdotal description. A community that often is not coming from or relating to academic practice. 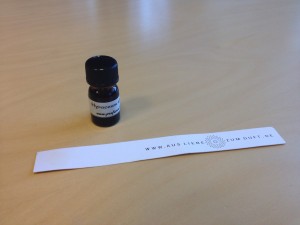 representational thinking and materialism – unthinking representational thought
–Academic “turns” and their continual returns to a kind of Cartesian epistemology.All of these turns have their base in Cartesian epistemology, a hope for a stable base… Smell as something that produces an anecdotal supplement to thinking. Danger is when smell becomes systematised. The need to resist the very discourse you are producing.
— Dangers of a representational materiality. The risks a rearticulation and reification in material thinking. Another regression into Cartesian thinking.
— Difficulty of establishing discourse between more critical vs. practical interpretations. How the notion of technologies of the self can be seen to relate to discussion of eye-tracking and 2d/3d representation. How important it is to acquire some form of knowledge to interfere with these systems, knowledge as a form of power that one needs to interpret or generate systemic change. Not only about the individual. How one can use someone like Foucault to form a critique of, for example, a cognitive science approach. Often no critique of the framework in such research practices (eg. definitions of accuracy in scientific practice).
— Roland Barthes on the Organon of Representation. The “third meaning” and what the photograph is not showing. Smell or sound cannot be easily reduced in such a way or systematised.
— But there is a problematic with smell as well, when you can have concepts as The smell of the orient, or indian food.
— Also, Alfred North Whitehead’s “smelly thinking.”
— When Jacques Chirac made a statement on migration politics and said can you imagine the smell of banlieue? Migration as a smelly thing. The ease of expelling or dismissing someone from a discourse.
— The matter of working with materials it is what many of new materialist argue as a way of getting out of subject-object discourse. Why do we need to discuss representational thinking, while we are doing things and not representing.
— There issue of subjectivity – We tend to think that we get out of subject-object by outsourcing critique. It is our responsibility to think about politics of doing things, that in any case there are some things which are more subjects than others and we should reflect on that. So to get rid of ‘either-or’ logic we have been introduced to ‘both-and’ thinking when there is form of liberal pluralism that we assume everyone can do things and we do things alongside the others, all together.
— There is a risk on “doing doing” things that might lead us into representational thinking even though we think we are aware of unthinking subject-object binary but when it comes to intervention, to engage with material world, we fall into the trap of representational thinking by illustrating things that restricts us from doing otherwise. Ahmed says in her article Orientation Matters: “What a simple point: what we “do do” affects what we “can do.” This is not to argue that “doing” simply restricts capacities. In contrast, what we “do do” opens up and expands some capacities, although an “expansion” in certain directions might in turn restrict what we can do in others.”

the anecdotal
— The anecdotal is not really systemic or objective.
–Sean Cubitt* and Mike Michael articles on anecdotal as an evidence that is not systematic way in which anecdotal evidence is dismissed as evidence
— In race studies, we have seen that as if racism is not a system of violence but an anecdote. anecdote has become a way to dismiss the existing conditions of racism and lived experiences.
— Sarah Ahmed has written on race and anecdote and keeps using one anecdote in her work frequently.

materialism’s relation to idealism
– Material turn as something that could potentially be seen as nostalgic or idealistic. Those people who feel that they cannot be Marxist deciding to be “materialists.” Materialism as a kind of acceptable code word. Left movements in 70s as highly idealist (e.g. Swedish Maoists).
— The rise of site specific art works in the 1970s leading to a nostalgia of place.
— An underlying, idealistic current of nostalgia that remains in certain innovation discourses. Same holds true for “new” media products, which further nostalgic or old-fashioned ideals in their new media shells.
— Hegel’s idealism always contrasted or set in opposition with Marx’s materialism. Materialism understood as the opposite of idealism is a boring, unhelpful way to think of it.
— Benjamin and Adorno conversation on aura. Adorno proposed a clarification for Benjamin’s line on aura, suggesting that the “forgotten human residue in things” (Benjamin) was that of reified human labor. Benjamin insisting that “there must be a human element in objects which is not the result of labor.” This could be a new materialist style origin that human beings share with non-human nature.
— Obscuring of material labour is not necessarily problematic, but the obscuring of abstract, immaterial systems of capitalist value is dangerous. What is interesting about labour is not just its physical, material aspects.

SUGGESTIONS
Suggestion to make a reading group for the theme by discussing reading things that are collected. For the first reading group perhaps we could use the Sara Ahmed text ‘Imaginary prohibitions: Some preliminary remarks on the founding gestures of the ‘new materialism’’ (European Journal of Women’s Studies, 15 (1), Pages 23-29).