Ståhl and Östling presented a 45 minute performance of their artist book, “23,500” (Malmö: Publication Studio, 2013). As described in their statement for the seminar, the book engages with “the interstitial space between architecture, materiality and gentrification. Drawing upon a substantial archive of photographs and texts, the concertina publication consists of a 12m long print documenting the Sheffield housing estate Park Hill – a massive, council-owned, Brutalist structure currently being privatised and therefore undergoing massive refurbishment. The image on one side of the print is a collage of photographs that together make up the entirety of the facade of the complex. The opposite side of the print contains a series of text collages weaving together descriptive text, archival material and references to architectural theory. The covers of the publication are cast in concrete, the same material used to construct the frame of the housing complex itself.”

For the seminar four Kodak Carousel slide projectors were used to project a black and white mosaic style panorama of Park Hill estate, which Östling slowly cycled through while Ståhl read from the text of the book. Much of the reading focused on giving granular descriptions of the estate, with an emphasis given to the edifice itself, the fractal qualities of its hard angles and rough surfaces as well as its occasional patches of washing, graffiti or leftover rubbish, traces of inhabitants within what is currently a largely derelict space. The cycling of slides from right to left was such that one was taken on a “walk” around the entire facade of Park Hill, finishing at the end of the performance back at the first slide and starting point of this verbal and visual tour.

Summary of Q&A
Q: Highly evocative nature of these English, brutalist style estates. Any more information specific to the history of Park Hill estate?
A: Park Hill has a quite iconic location, positioned as it is at the top of a hill very near the centre of Sheffield. One sees it on the way in to town. There has always been a love/hate relationship to Park Hill on the part of locals. The estate is now being regenerated by developers Urban Splash, which has lead to some of the estate’s iconic features and history being celebrated while simultaneously pushing other aspects of this history to the side.

Q: How should we think of this project in relation to our earlier seminar theme of materiality and the upcoming theme of performativity?
A: There is the materiality of the book, with its covers cast in concrete, and then in this performance there is the representation and sense of the interaction of the body walking within the structures and circling the estate. 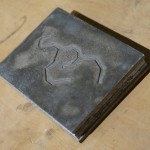 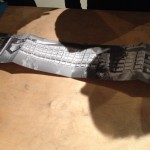 Q: Why weren’t any more overtly social perspectives included in this project?
A: The building itself is a manifestation of the social and we wanted to try and let it speak for itself in many ways. The book includes an essay that considers several of the social perspectives of Park Hill and there are also a selection of quotes from theory dotted throughout the text that occasionally touch on the social dimension.

Q: Every aesthetic decision has its implications, so why was a black and white aesthetic?
A: Admit that black and white has certain prevalent and possibly problematic aesthetic connotations. Having tried colour prints as well, black and white felt less obtrusive and most fitting in the context of the project.

Q: How might one describe the politics of the project? Architecture can be understood as a manifestation of a perceived social problem. Malmö’s Västra Hamn regeneration as a very preprogrammed process.
A: The history of Corbusier and modernistic approach which is already politically informed. The politics around Park Hill have changed over time, the voices heard have changed. In the 1950s Park Hill had a certain political flavour (optimistic, utopian, “highways in the sky”), but by the 70s there was much more of a negative connotation and again in the 80s the political context shifted again in relation to Thatcher’s government. Layers of political, material and social history in Park Hill.

After the seminar, Jacek Smolicki carried out a short video interview with Ståhl and Östling, asking them to reflect on the archival dimensions their project.